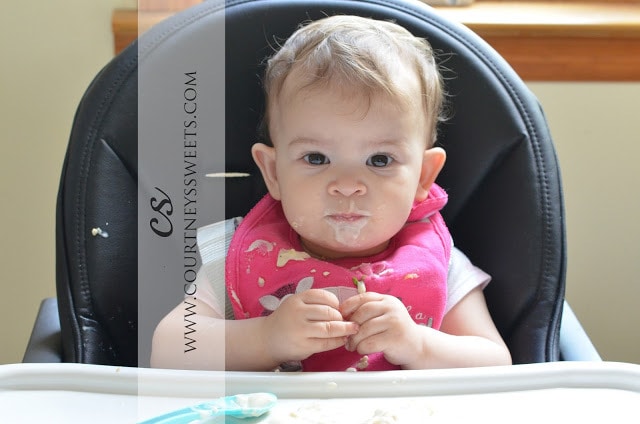 Just one of the worst feelings in the world that I have felt is feeling helpless.  That is how I felt all day today.  This morning started out like any other.. Sweet Baby and I woke up and snuggled right before breakfast.  I made myself oatmeal and decided to try giving her oatmeal again since she’s refused it in the past.  I mixed a extremely small amount of organic oatmeal into her banana and yogurt which she usually eats every morning. She really enjoyed it – she even picked up the spoon and took a few bites with it instead of just using her fingers.  We love sensory eating.. if you follow us on instagram I’m sure you’ve seen our pictures 🙂

Once she was finished I cleaned her up and we played with her toys.  About 3 hours go by and she gets fussy – time for num nums! (breastmilk) She’s even signing more and started clapping her hands.. oh how I love her!  After she was full she fell asleep in my arms.. then out of nowhere violently threw up not once, not twice, but three times within 20 minutes..and it doesn’t stop she was to the point of throwing up bile.  My poor Sweet Baby!
This wasn’t the first time.. she has the same exact reaction to chicken and soy.   The first time it happened we thought it was some sort of stomach bug.. but then we tried chicken again and the same reaction.  Also with Soy.  So like any other person I turned to google.. Then I found something called FPIES: Food Protein Induced Enterocolitis Syndrome.
She has all the symptoms of this.. and so I called her doctor and he also thinks it’s highly possibly.. while extremely rare he said from what I told him it could be it.  Unfortunately he’s not familiar with it at all so we’ll be going to an allergist and possibly a pediatric gastroenterologist.
Thankfully she hasn’t eaten enough of the trigger food to have a really bad reaction.. but I don’t want to know how bad that could actually be.  She’s had a nibble here and a nibble there.  There was maybe a drop of oatmeal in her yogurt that she had about 3 bites (more like licks) total.
Now she’s fine aside from being tired.  I have noticed it can go on and on if we put anything in her stomach so I just want until she has a bowl movement.. she has a bowl movement about 2 hours after throwing up and then she’s done vomiting and also extremely hungry.. we start off slow letting her stomach ease into getting full.  All along I thought this is normal.. babies throw up.  Then today that mother’s instinct came out and I just knew that this wasn’t what I thought to be normal, that this is more than just some texture issue since it’s 3 hours after eating, and most importantly that I have to be the voice for my baby.  She hurts.. I hurt.   Now we start the search for answers.. FPIES may not be it, but I won’t stop until I do find out what it is.