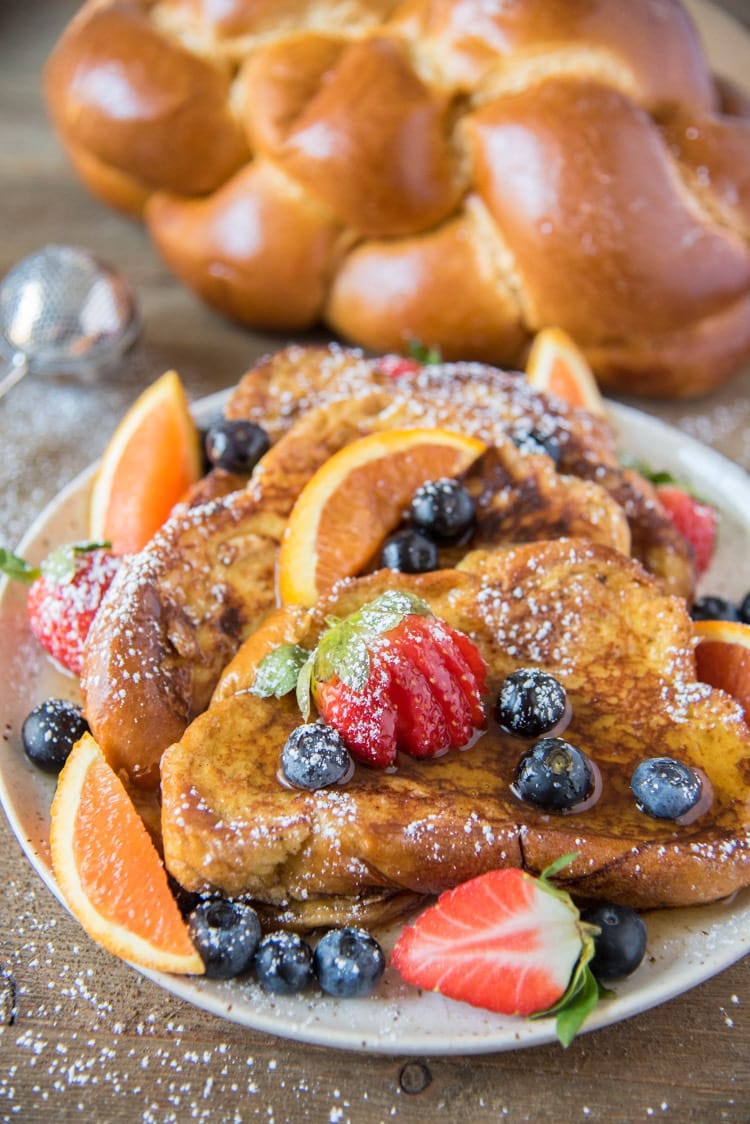 Growing up my mom never made french toast using plain white bread, it was always Challah French Toast, and it was always the best! I love eating it with some salted butter. The fresher the Challah, the better, but when it comes to making challah french toast, we like to use day old challah. 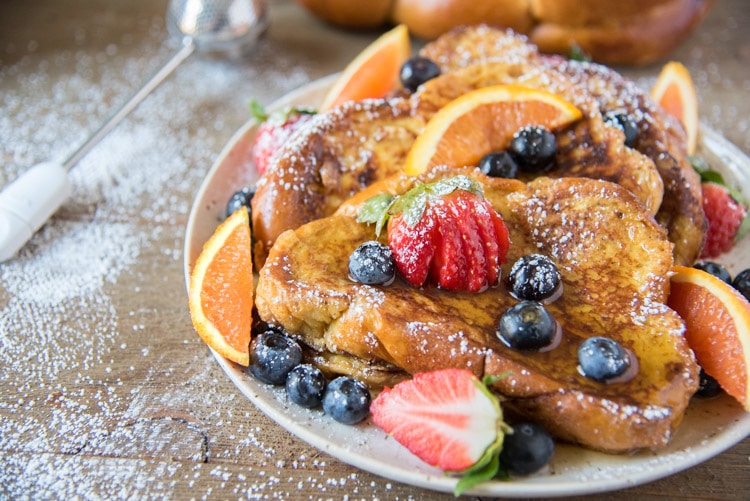 Whenever my husband has vacation I’m sure to make a large batch of this challah bread french toast recipe. You can even freeze some to enjoy another day. 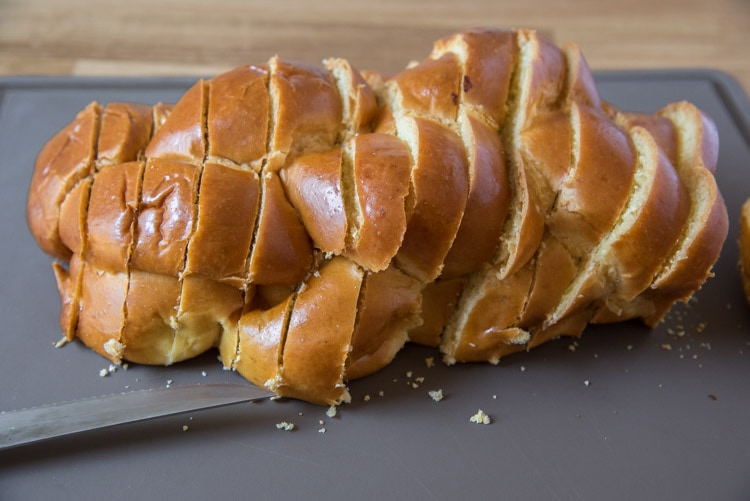 What is Challah Bread?

Challah bread is a braided bread typically eaten on Jewish holidays or just with dinner. We grew up getting fresh Challah every weekend to make our Challah Bread French Toast for breakfast. Challah bread is made up of eggs, flour, white, yeast, sugar, and salt.

Challah is great for many recipes, but my favorite way to use it is enjoying plain or a french toast recipe. Challah brings me back to my childhood when we would just eat Challah and then stuff our faces with Black and White Cookies right after. I love and miss the flavors of my childhood, so it is always nice to make them again to remember. Each bite brings a flood of memories back to me. 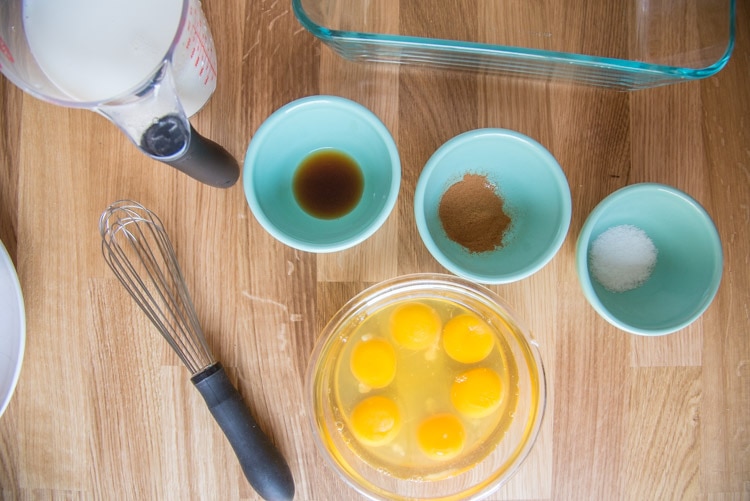 You can use the same ingredients you would typically use for your traditional french toast recipe. For our challah french toast we use:

If you want the mixture to be thicker, you can use half and half instead of the milk, but this will add calories and fat, so that is something to keep in mind. We prefer to use whole milk for our challah bread french toast recipe. 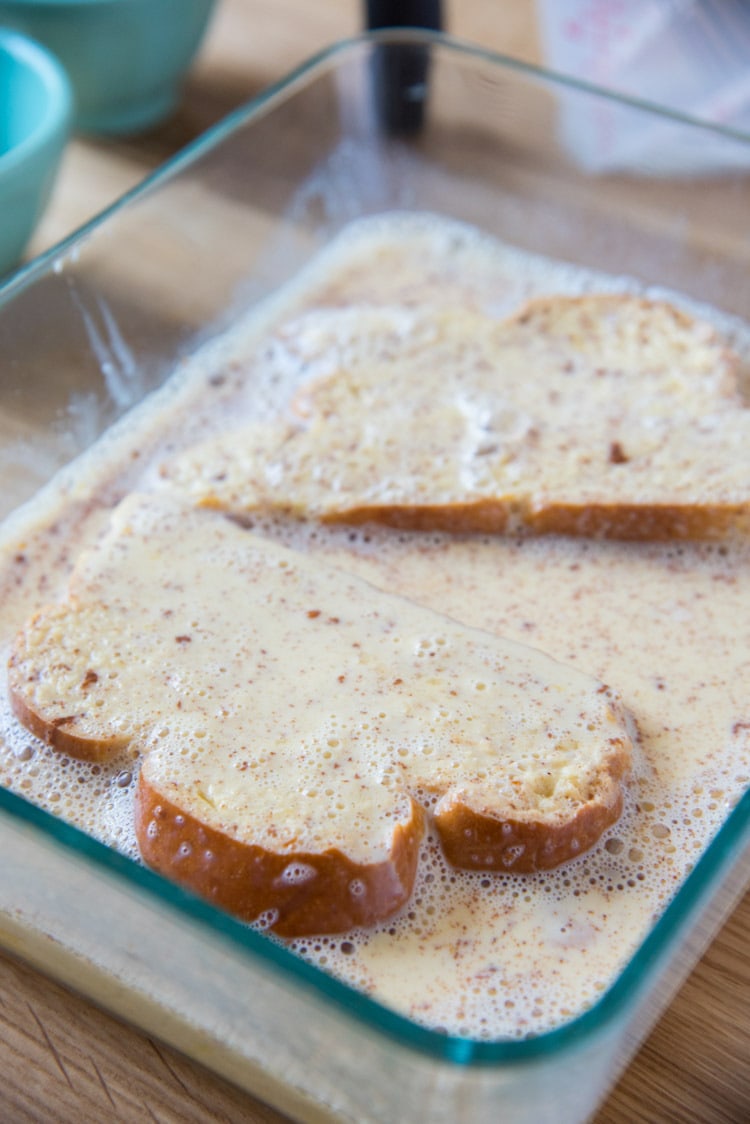 How to make Challah French Toast

It’s so easy to make challah bread french toast! You can cook it just as you would a traditional french toast. We use eggs, milk, cinnamon. You want to cook it evenly on both sides and then if you want it crispy you can keep it in a warm oven while you’re cooking the other pieces. We usually have the oven on around 200-220 degrees F. 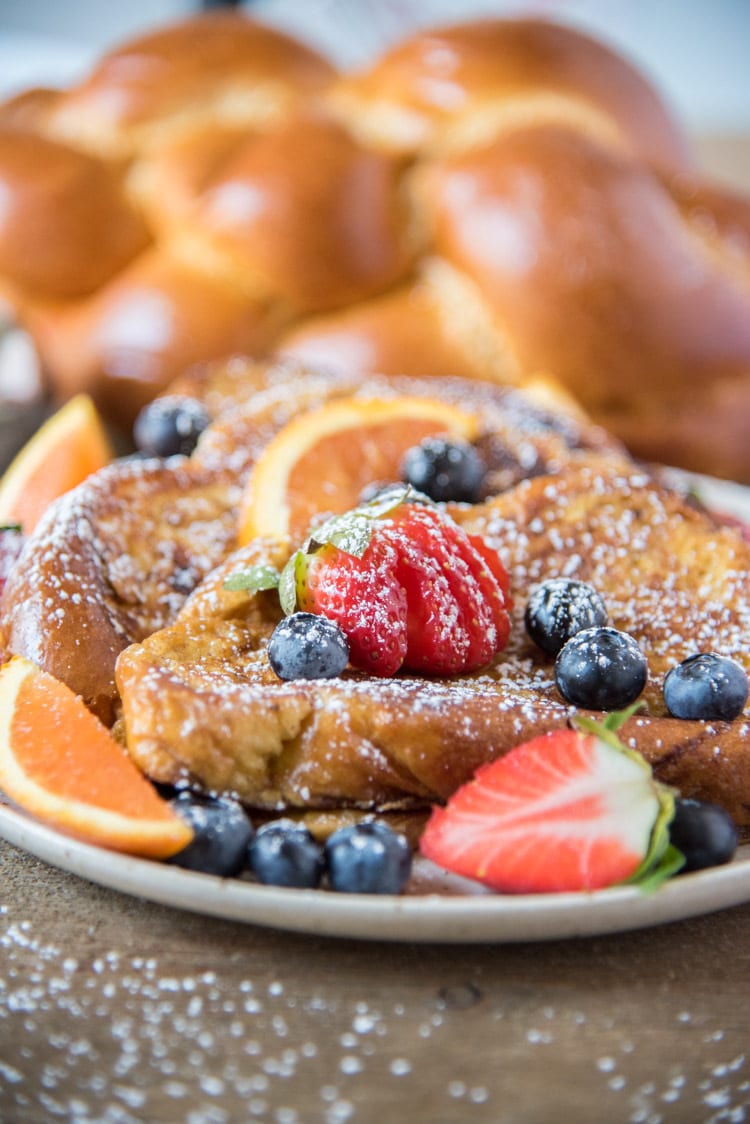 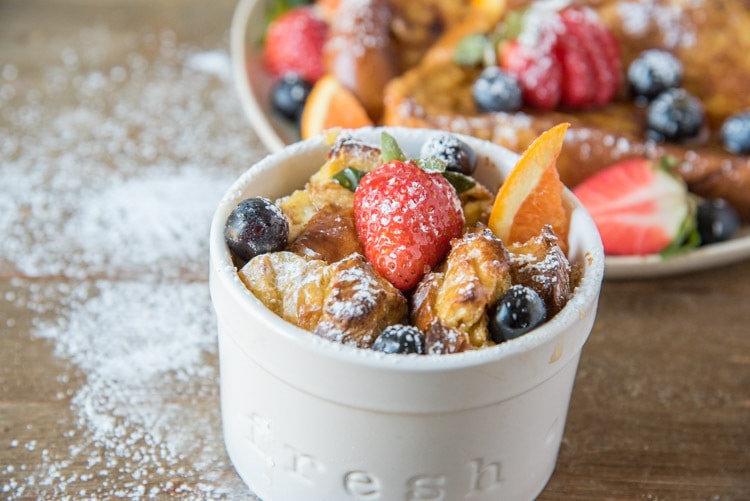 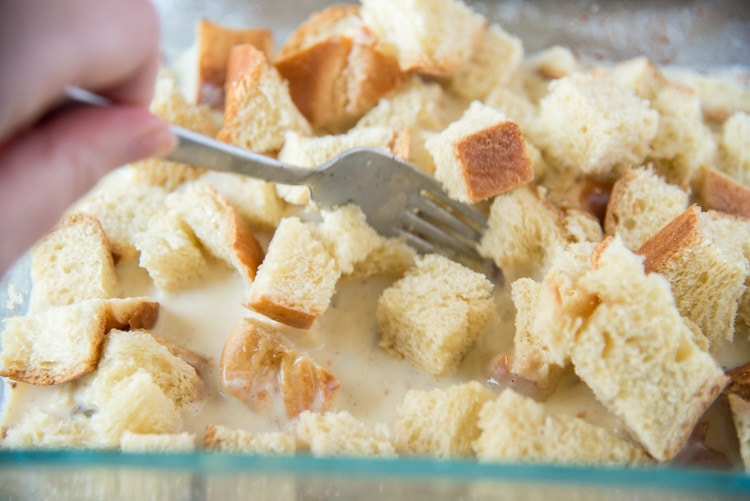 It’s easy to make baked Challah French Toast! When placing into your container whether a large casserole dish or small ramekins remember the bread will expand as it bakes so only fill it 1/3 of the way. Whenever we make a baked french toast recipe we use small ramekins instead of making a whole french toast casserole.

Cut your challah into bite-size pieces.
Whisk together the same ingredients but increase to 2 cups milk.
Bake in an oven safe dish at 375 for 30-40 minutes. 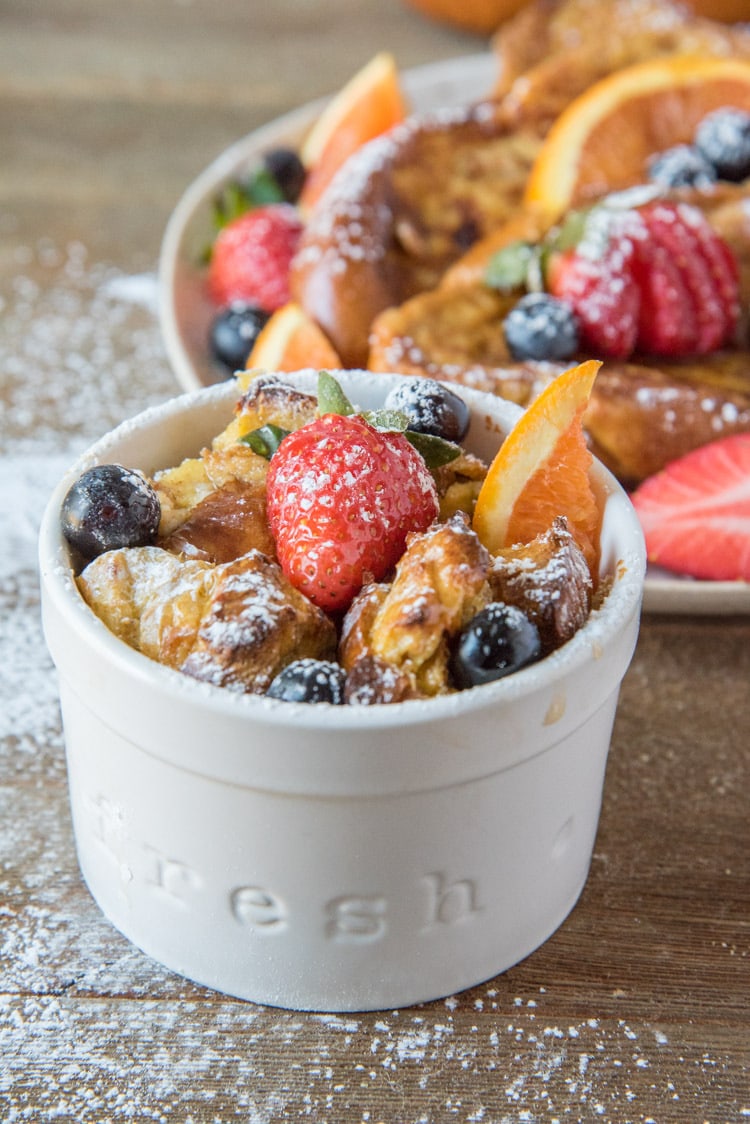 This makes a beautiful french toast casserole when we do make it a full size or our single sizle ramekins for portion control. We just put all of the challah bread cubes soaked in the egg mixture into a large casserole dish or the mini ramekins and then bake. Once the french toast bake is done we would top it just as we have now. Guests love the french toast and it makes for a beautiful dish as well. Browns can be boring. so that is why we like to add tons of color. You could even add some homemade whipped cream if you wanted.

How to serve Challah French Toast

We like to serve our Challah French Toast Recipe with some fresh citrus, like slices of grapefruit or orange, fresh berries, maple syrup, and powdered sugar. 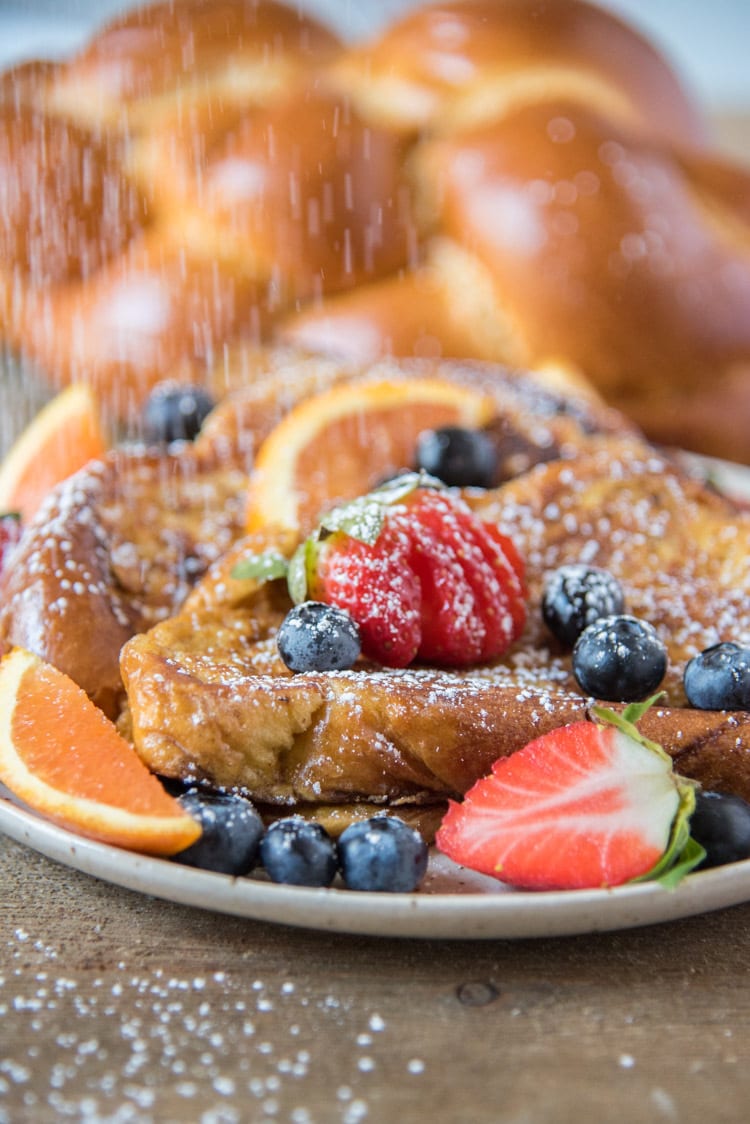 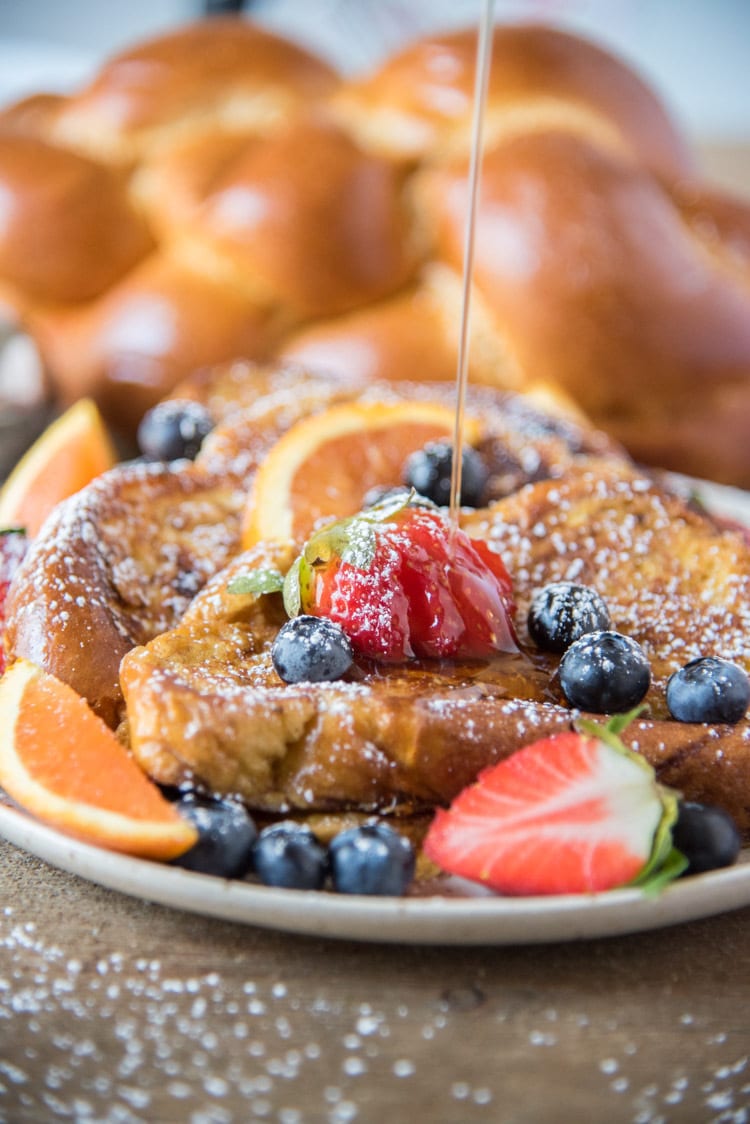 Here are some recipes to make alongside with our french toast recipe: 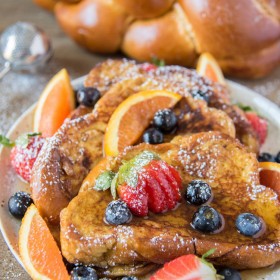 If you don’t like sweet toppings, this french toast is still flavorful and can be enjoyed with just a little fresh fruit. This makes for a simple breakfast but still delicious that everyone will enjoy. We hope you enjoy our favorite Sunday morning breakfast recipe as much as we do! 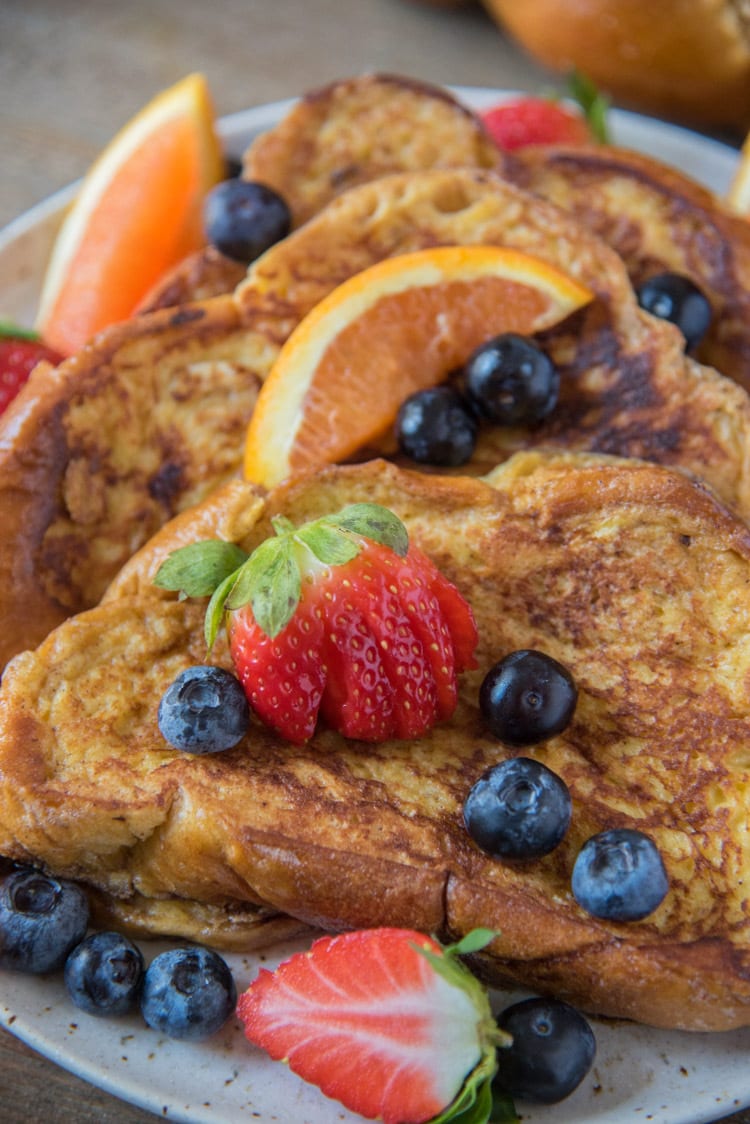 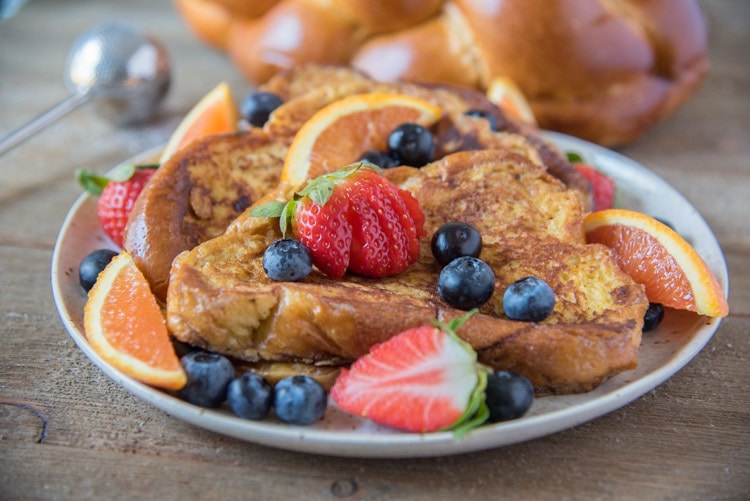